ANTHROPOCENE: The Human Epoch (ONE NIGHT)

"Astonishment. Pure, lurid, ravishing, genuine astonishment." -NONFICS. The multiple-award winning documentary team of Jennifer Baichwal, Nicholas de Pencier, and Edward Burtynsky (MANUFACTURED LANDSCAPES, WATERMARK) are back with a stunning sensory experience and meditation on humanity's massive re-engineering of the planet. We're proud to be one of the theatres where this film will be screening nationwide for its ONE-NIGHT premiere on September 25th to coincide with the U.N. Climate Action Summit. Shot in ultra-high-definition 5K, this is recommended to be viewed on a big screen.

After nearly 10 years of research, the Anthropocene Working Group, an international body of scientists, argue that the Holocene Epoch gave way to the Anthropocene Epoch in the mid-20th century as a result of profound and lasting human changes to the Earth. From concrete seawalls in China that now cover 60% of the mainland coast, to the biggest terrestrial machines ever built in Germany, to psychedelic potash mines in Russia’s Ural Mountains, to metal festivals in the closed city of Norilsk, to the devastated Great Barrier Reef in Australia and massive marble quarries in Carrara, the filmmakers have traversed the globe to document the stunning evidence and experience of human planetary domination. At the intersection of art and science, 'Anthropocene' witnesses a critical moment in geological history — bringing a provocative and unforgettable experience of our species's breadth and impact. Narrated by Alicia Vikander. Not Rated, 87 mins.

"The culmination of a major body of work and as visually stunning and intellectually invigorating as the previous two films are." -POV

"Upending the visual vocabulary of the nature film made popular by National Geographic and others, ANTHROPOCENE explores whether art in the hands of a photographer and film-makers can advance the understanding of science." -The Art Newspaper

"Seeks to reveal rather than lecture, in the hope that our eyes will convince our brains to act before it's too late." -Toronto Star

"A strong reminder of the global nature of a problem that cannot be isolated by borders." -Seventh Row

Advance tickets are recommended for this movie.

***If you have a free Miniplex movie ticket and want to be sure you get a seat, please show up EARLY and exchange it for a ticket from the bartender/cashier in Richards' Goat Tavern. Thank you! 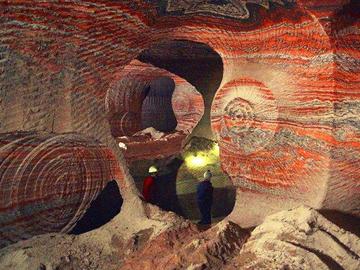