"A perfect cinematic experience...A meditation on modern rituals and ancient ones, conflicts between the native Aboriginal and invasive European cultures, human language and storytelling, female and male gender roles and the misunderstanding between them, the cruelty of nature and the madness of the modern world." - Paste. The second film for our "Roeg Gone Rogue" weekend, celebrating the life of the director who passed away this November, is a mesmerizing 1971 odyssey through the Australian Outback, which remains one of his most beautiful and affecting films. A brother and sister from Sydney find themselves on their own when their scientist father, suffering a nervous breakdown, takes them deep into the wilderness to take his own life and theirs. After they get lost in the desert, a young indigenous man on walkabout finds and befriends them, and they follow him despite a language barrier, hoping to find their way back to urban life. Rated PG originally (like a modern PG-13). 110 minutes.

"In early efforts, Roeg came close to making films that felt more like dreams than stories. Walkabout comes closer, starting as a nightmare, shifting to an idyll, then ending up somewhere else entirely, somewhere that feels like waking up." - AV Club

"Nicolas Roeg does not subscribe to pious sentimental values.. The movie is not the heartwarming story of how the girl and her brother are lost in the outback and survive because of the knowledge of the resourceful aborigine. It is about how all three are still lost at the end of the film--more lost than before, because now they are lost inside themselves instead of merely adrift in the world." - Roger Ebert

"The contemporary city turns sex sour, and so life itself, it can be argued; and certainly this is the idea most eloquently communicated by Nicolas Roeg’s Walkabout. No solution is offered – it’s rather late to start tearing down the concrete – merely the statement made, in the form of a fable, to the effect that the gains of civilisation, a word that’s closely associated with city, have been balanced by losses." - The Telegraph

***NO FREE PASSES for this screening, thank you. 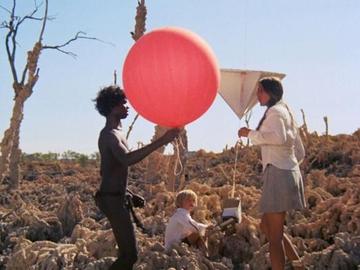